The Cabin Manager app that AeroPad comes with by default has the ability to remotely play any of the cabin sound effects that you have set up for your particular aircraft through the Aircraft Manager screen in LRM. Cabin Manager takes it's inspiration from the touch screen panels that you find onboard many airliners.

Although these touch panels (in the real-world aircraft) are generally used for controlling lighting and cabin temperature, I personally felt that this style of interface to remotely play your cabin sound effects on a second screen or a remote device (like an iPad, Android tablet or laptop) would be handy and hopefully a useful feature for users that want to add a little more immersion to your airliner flights.

When you open the app it will detect your current aircraft (your aircraft should ideally be loaded into the simulator before opening this app) and it will then check for all available sound effects that you have set up through the Aircraft Manager screen in LRM.

By design, these sound effects will play on the computer that is running LRM and not on the tablet or other device that Cabin Manager is running on which means you can still benefit from using this app even if you are using headphones whilst using your simulator.

The Cabin Manager App is also “virtual airline aware” and if you are a member of a virtual airline on FsHub and you have an active airline selected in LRM, the cabin manager interface will display your virtual airlines' configured styling otherwise it will use the default colour scheme and logo.

Here are some screenshots showing the default colour scheme and a virtual airline theme:

To change the volume of the audio playback you should use the Sound Mixer setting on the computer that is running LRM as shown here: 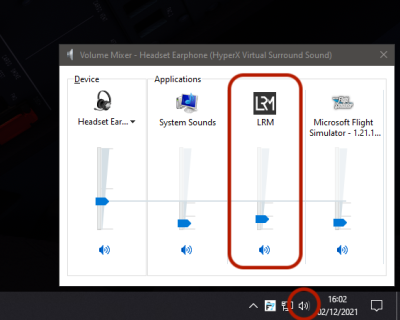