You can now improve your flight reports by configuring LRM to automatically geotag your simulator screenshots!

Geotagging essentially means that when LRM detects a new screenshot (in the directory you configure - see instructions below), current flight metadata is then attached to the file automatically.

Specifically, LRM will automatically geotag your screenshots with the following data:

When you upload geotagged screenshots to FsHub, FsHub will automatically extract and process this data and store it with the image in our database, this then enables FsHub to display your screenshots on your flight report map as well as in geographical image searches and airport information page within FsHub (this is a planned feature that is coming soon).

This feature is (in our opinion) super cool as it allows you to view exactly where your aircraft was (in the world) when it was taken!

We decided that, instead of LRM client automatically uploading your screenshots when you take them, we purposely choose to just “tag” the screenshot file (PNG, JPG etc) to enable you to (optionally) edit them prior to uploading to FsHub. 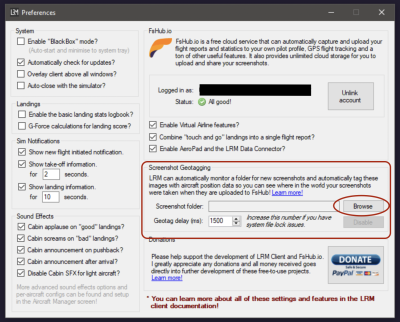 2) A folder window will now appear and enables you to select a folder, you should select the folder that your screenshots are saved to, personally, I use the standard Windows Screenshot shortcut (WIN+PRNTSCRN) button combination to create screenshots and these are, by default saved to my Pictures\Screenshots directory so I will select that like so: 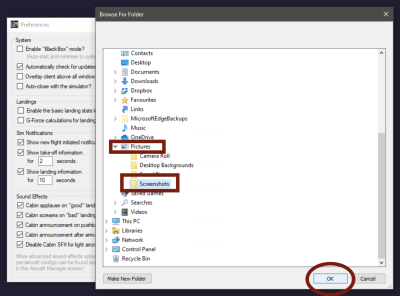 3) After clicking on the OK button, LRM will present you with this message, it is up to you if you want to restart LRM now but be aware that screenshot geotagging will not work until LRM has been restarted!

At this point (assuming you have now restarted LRM), any screenshots you take should be automatically geotagged!

Are your screenshots not getting geotagged?

Assuming that you set your screenshot folder correctly this may be caused by a number of factors but fear not, these are easy to resolve…

There is an advanced option (called Geotag delay which, by default is already set to a sensible default value (1500ms), if you notice that your screenshots do not get geotagged, you can increase this number as shown in the screenshot below:

This option is user-configurable and was added because some users, depending on their screen resolution, simulator, the use of file sync programs (eg. OneDrive, Dropbox) or screenshot-taking method can prevent LRM from geotagging the file immediately (as those other programs still have the file open or still being written to), this value essentially means that LRM, once it has detected the new screenshot will wait for up to the number of milliseconds set in this box before it attempts to write the metadata to the file.

You can easily identify if your screenshots are getting geotagged successfully by either uploading them to FsHub and checking for the compass icon in the top left of the image thumbnail (more info on this below) or by checking your LRM debug log file (using the Help > Advanced > Debug log menu) where it will report if there is a problem with geotagging a certain screenshot file.